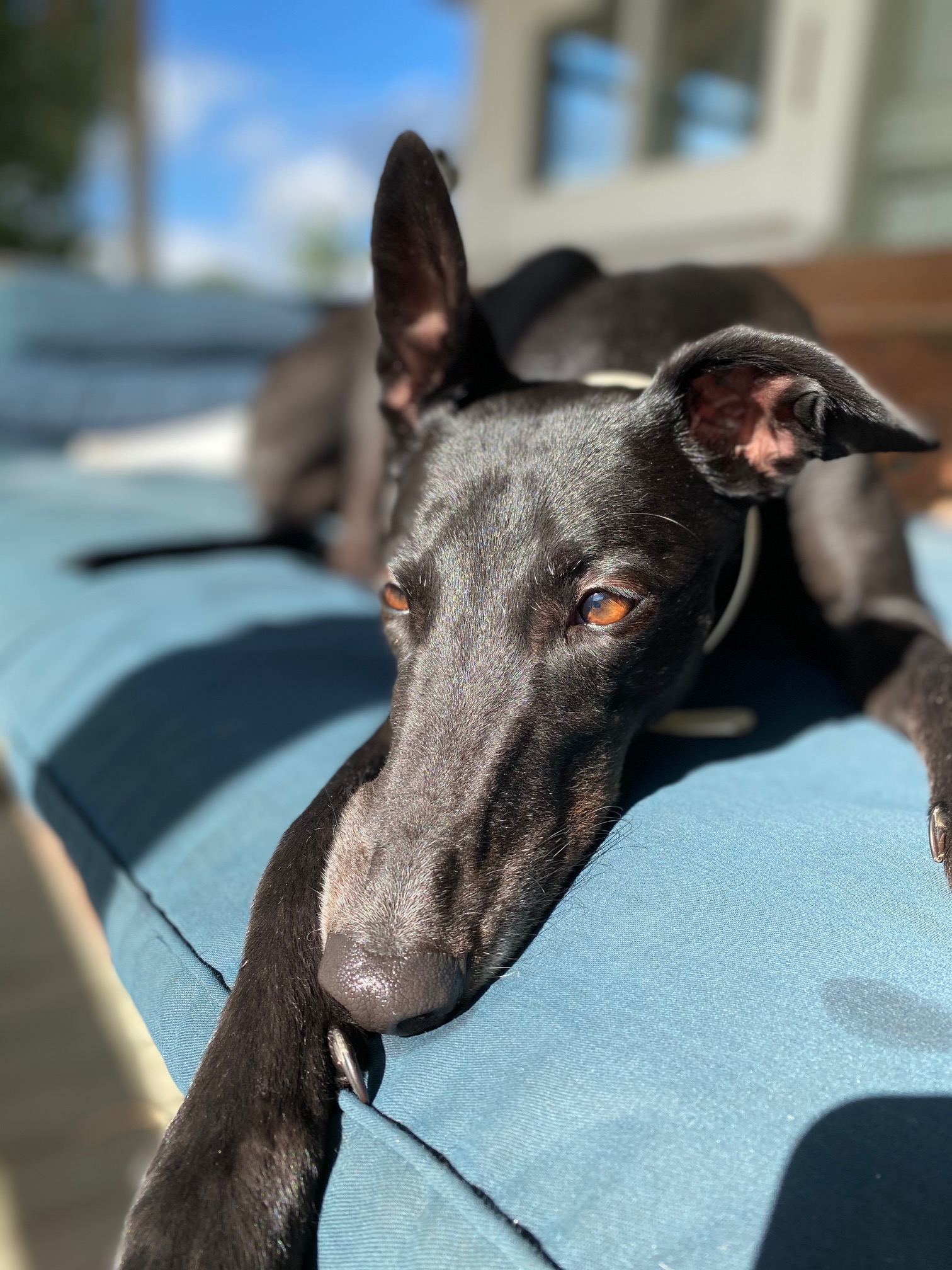 Have you noticed the number of greyhounds in 2479 recently? You may have seen one of these placid, sleek and elegant pooches walking in unison with their owner or hitched to a pram, tied up outside Foodworks or having a run at the showgrounds. Why the proliferation of greyhounds? Because they make wonderful pets!

But this is not Bangalow’s first brush with hounds. In the 1930’s, local showgrounds around NSW became the centre of country greyhound racing. Lismore showground sought approval (successfully) for greyhound racing in 1927. Bangalow was to follow this application for greyhound racing at our local showground in 1936. However, a petition signed by 157 local residents at Bangalow in 1936, organised by the Protestant churches, opposed the granting of a dog racing licence for Bangalow Showground. They found an ally in the Nashua P&C Association that claimed the sport of greyhound racing ”detrimental to the moral and spiritual welfare of the district”. Both protestors were delighted when Bangalow Agricultural and Industrial Society refused the application.

Greyhounds can be misunderstood as a breed, especially as ex-racers were once required to be muzzled in public, right up until 2019, which was not helpful to their public image. Greyhounds, by temperament, are generally sweet and mild mannered. They rarely bark, walk beautifully on a lead and don’t have a doggy aroma. They have two speeds; all out sprint and couch potato. However, they require very little exercise – a 15-minute walk each day is enough – making them ideal for low-maintenance living, those in apartments, or busy families.

Greyhounds are naturally fleet of foot and some will (like all dogs) chase after small animals, the difference being that a greyhound can run much faster than your average dog (at speeds of up to 70 km per hour) so they definitely have more chance of catching whatever they’re chasing. This being said, our greyhound Luna doesn’t have that chase instinct (probably why she was a poor performer race wise) and is fine around dogs of all sizes, chickens and even guinea pigs! It pays to have your new greyhound on a lead for the first few weeks or months (and wearing a muzzle for the first two weeks) until you come to fully understand their unique temperament.

Whilst all groups and industries have ‘bad apples’, my experience is that most people in the greyhound racing community are kind souls who love their dogs. Further more, greyhounds who are unsuitable for racing due to injuries or failure to chase, are kept by their owners or put up for adoption through organisations such as Greyhounds As Pets (GAP NSW), rather than being euthanised. For this reason, Luna and her greyhound friend Morty should be considered ‘retired’ rather than ‘rescued’. They are dogs that were very clearly loved by their previous owners, which shows in their loving and well-adjusted personalities.

Like any new pet, greyhounds do require a little time to adjust to their new homes. Luna, for example, had never encountered a flight of stairs so had to learn how to climb them. It’s worthwhile paying attention to the 3:3:3 rule with your new greyhound, like any adopted dog. The first three days is a time where your new addition will probably be overwhelmed with their new environment and may be anxious or not want to eat. At the three week mark, your dog will be starting feel more comfortable and start showing their true personality as they settle in. After three months, your new dog will finally feel comfortable in their home as the bond with you is cemented. With time and patience, your new greyhound will soon emerge from their shell, rewarding you with a lifetime of love and loyalty.

There are many benefits in choosing a greyhound as a pet. There are lots to choose from, the adoption fee through GAP NSW is only $250 and they come to their new home fully vaccinated and de-sexed, having had a full dental too. As most have come from a loving upbringing, they often have less behavioural issues than other dogs available for adoption and are generally toilet trained (despite having often not lived in a house). They also come with a martingale collar and lead. GAP NSW adopts all of their dogs on a two-week trial. However, if you’re not ready to commit to pet ownership but have some love to give, GAP NSW also places dogs in foster home situations. This is a wonderful way to help rehabilitate these dogs from racer to family pet. But be warned!You may fall in love! Find out more gapnsw.com.au